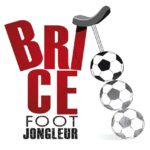 WHO HAD BELIEVED IT

Born in famous circus family PEZON, three tamers generations. On the mother’s side : famous stage actors and cinema too.

As an obvious fact Brice wanted since his childhood to make the others laugh. At 14 years-old he discovers street art comedy and starts to juggle as a hobbie. It’s only in 1997 while he assists at Handy with Balls show, professional street performer, that he has decided to become a performer in his turn.

He enters the National Circus School Annie Fratellini in Paris and studies acrobatics, dance, unicycle and especially juggling with famous Italo Medini, international  star juggler, with whom he continued to pursue his training in his school in Fontenay-sous-Bois.

After several experiences, Brice creates his show in 2007. A combination with circus, street theater, comedy and improvisation. Show that he will not stop developing.